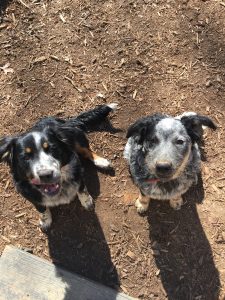 Just had an adjacent neighbor call about the teenager pups in her yard AGAIN. The pups are roaming off our 7.5 acres and becoming an obnoxious nuisance to the holler. We’ve got one neighbor who has been more chill than others and I appreciate their patience. But the one I hung up on this morning, well…to say we’ve gotten off on the wrong foot is putting it nicely. The pups, left to their own devices, are not working out. And the truth is we’re not working out the pups. Badly behaved animals are a product of their training/discipline, or the lack thereof. Only in the last 10 days have I had the opportunity to work with them, but I’ve not. Priss is now in early Pre-K via the county Headstart Program. I’ve used the last two weeks to take care of matters long needing my attention which have kept me away from home.

Because I’ve been gone, and because the roaming has ramped up over the last several weeks, we’ve taken to penning the working breed dogs up to 20 hours daily. It’s a catch 22 – when they’re finally released they’re frantic with pent up energy and run like there’s no tomorrow. And because they’re herding animals their instincts are to herd a neighbor’s horse (aka bark relentlessly until the neighbor is forced to drive up here to make us come after our animals). I’ve yet to meet her and need to make a point to introduce myself and give her my number in hopes that she will rarely ever need to call again for the dogs. And then there’s the other neighbor from this morning. We’ve never met in our 18mos of being on the property, and this is the first time we’ve spoken on the phone although she left a message one night about the dogs being on her property, and one other time she had mutual neighbor call. I apologized and tried to explain, to which she threatened county leash law ordinances, which I thought was profoundly gracious and neighborly of her (sarcasm). I pushed back and then hung up and immediately retrieved the dogs.

I get it. I don’t want neighbors’ dogs on our property either, especially when the chickens are free-ranging. And our dogs have committed multiple offenses (at least 6x to which we have always responded immediately). There’s truth to the proverb , “Good fences make good neighbors”, I wish we could afford a fence. Dear frustrated neighbor whom I’ve never met, you are within your rights to hold us accountable for our rambunctious animals, but your hostile attitude really sucks. We’re genuinely sorry our pups have disrupted your routine. As I explained we will either get this worked out or we will rehome the pair within the next two weeks. Maybe one day we will finally meet under friendlier circumstances…you know where we live.